Express Shipping across the USA

The brogue. An iconic footwear staple steeped in heritage. Identifiable by their distinctive punching and serrated trims, the brogue has transcended history from humble rural beginnings to the floors of formal dinners and working offices.

This suave style is incredibly versatile, adding detailed sophistication to sharp suits or a dash of off-beat cool to your weekend repertoire. But what makes a brogue a brogue exactly?

Knowledge is power. In this masterclass, we delve into the history of this handsome hallmark, quash some long-held misconceptions (what are wingtips anyway?), and answer the all-important sartorial question: how to wear brogues?

Ready to know your brogues inside and out? Let’s get started…

What are Brogues: A Brief History…

Born from humble beginnings, the brogue originated as a working man’s shoe made for Scottish and Irish farmers in the 19th Century.

The name derives from the Gaelic word ‘brog’ translating to ‘rough’ or ‘stout’. Rudimentary in design, the original brogue was made purely for function. Crafted with untanned animal hides and a series of punching to allow effective drainage in the wet, boggy conditions of the land.

From the grit of the marshes to the glitz of Tinseltown, over the next century, the brogue became a familiar style through the jazz era and went on to dress the greats of Hollywood such as Fred Astaire and Gene Kelly.

In recent years the brogue has revolutionized the dress codes of working gents in the city. Once considered a country shoe for the working class, the brogue is now a familiar sartorial staple, diminishing the once ‘cardinal sin’ of brogues in the business districts. 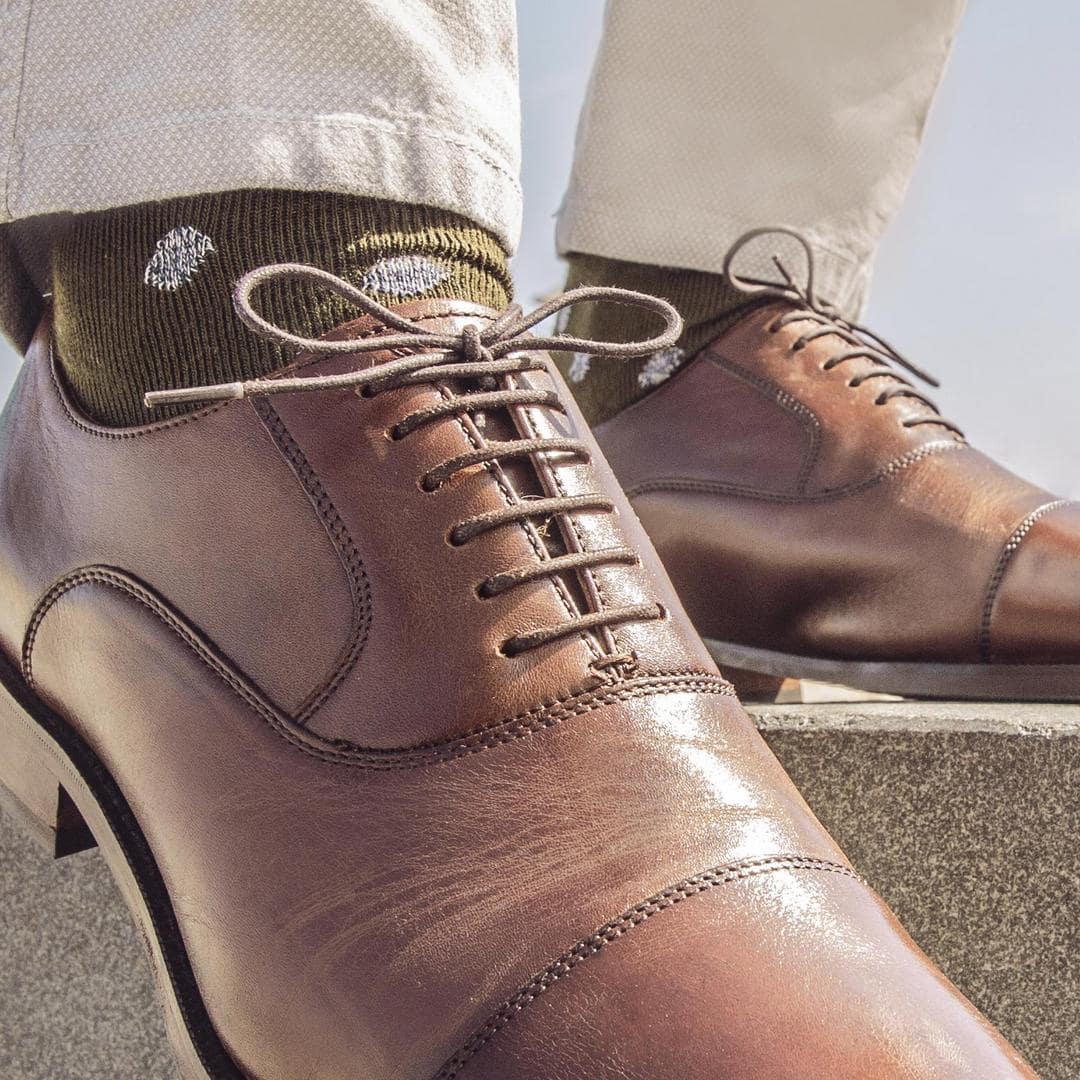 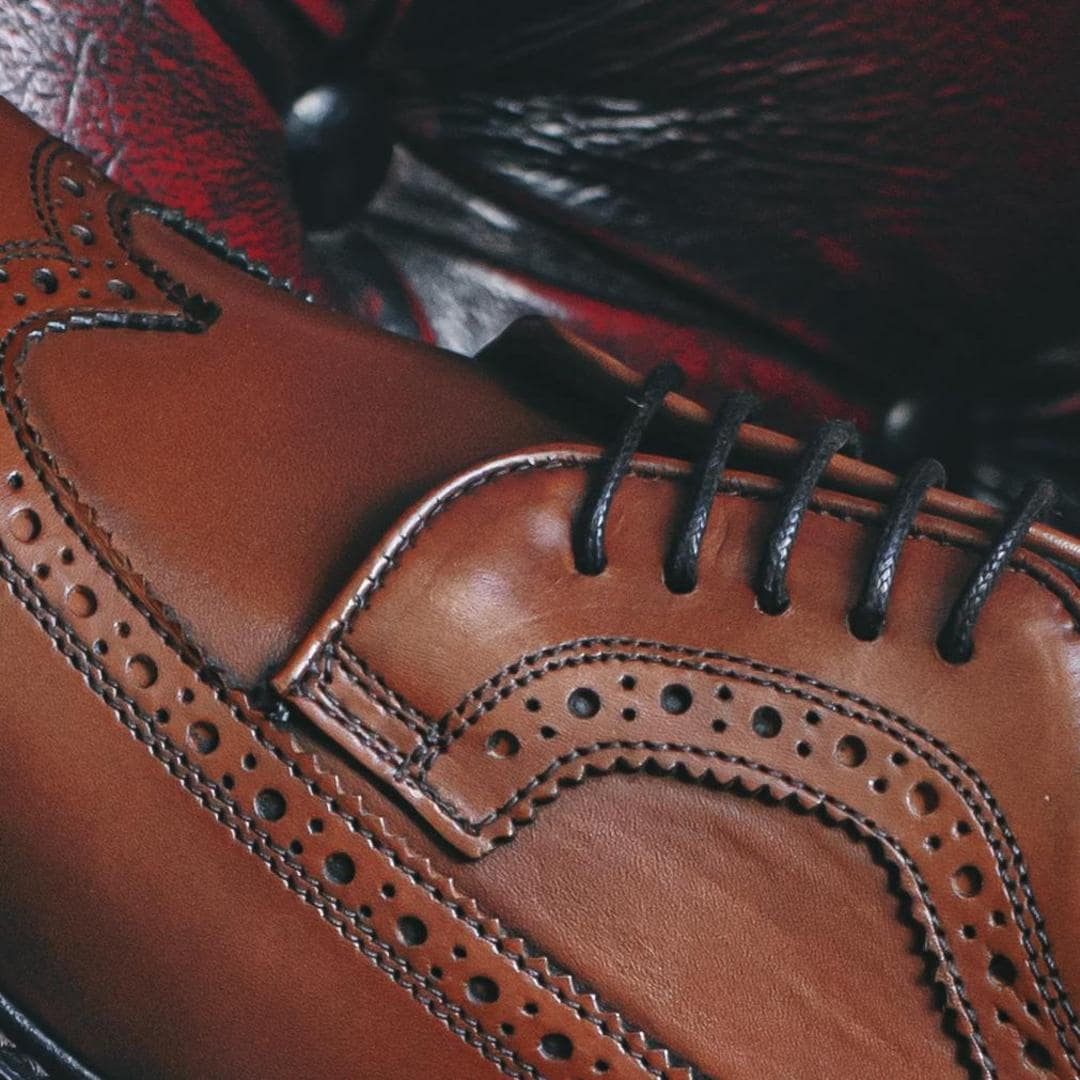 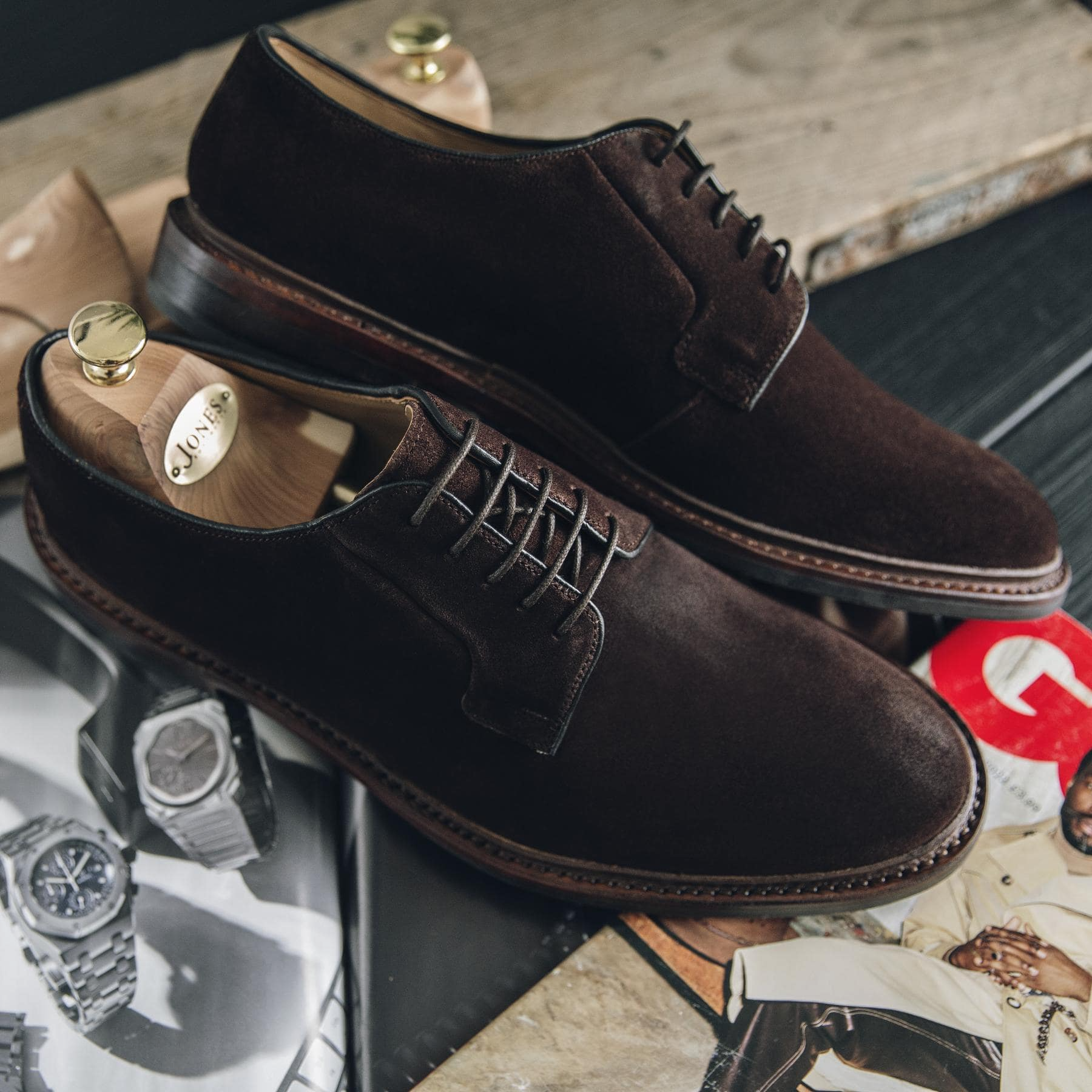 Oxfords vs Brogues: What’s the Difference?

What’s the difference between an Oxford and a brogue? The answer: it’s a trick question.

An Oxford Shoe is a type of men’s shoe with roots dating back a hundred years or so. Often worn for formal occasions, the Oxford is characterized by its construction which involves sewing the tongue and lace flaps under the vamp.

In contrast, Derby shoes (close cousins of the Oxford) are constructed with the lace flaps sewn on top of the vamp, creating a ‘gap’ between the flaps and the tongue which runs underneath. Derby shoes are often mistaken for simply being brogues – but the existence of plain Derby shoes demonstrates that this is a misconception. 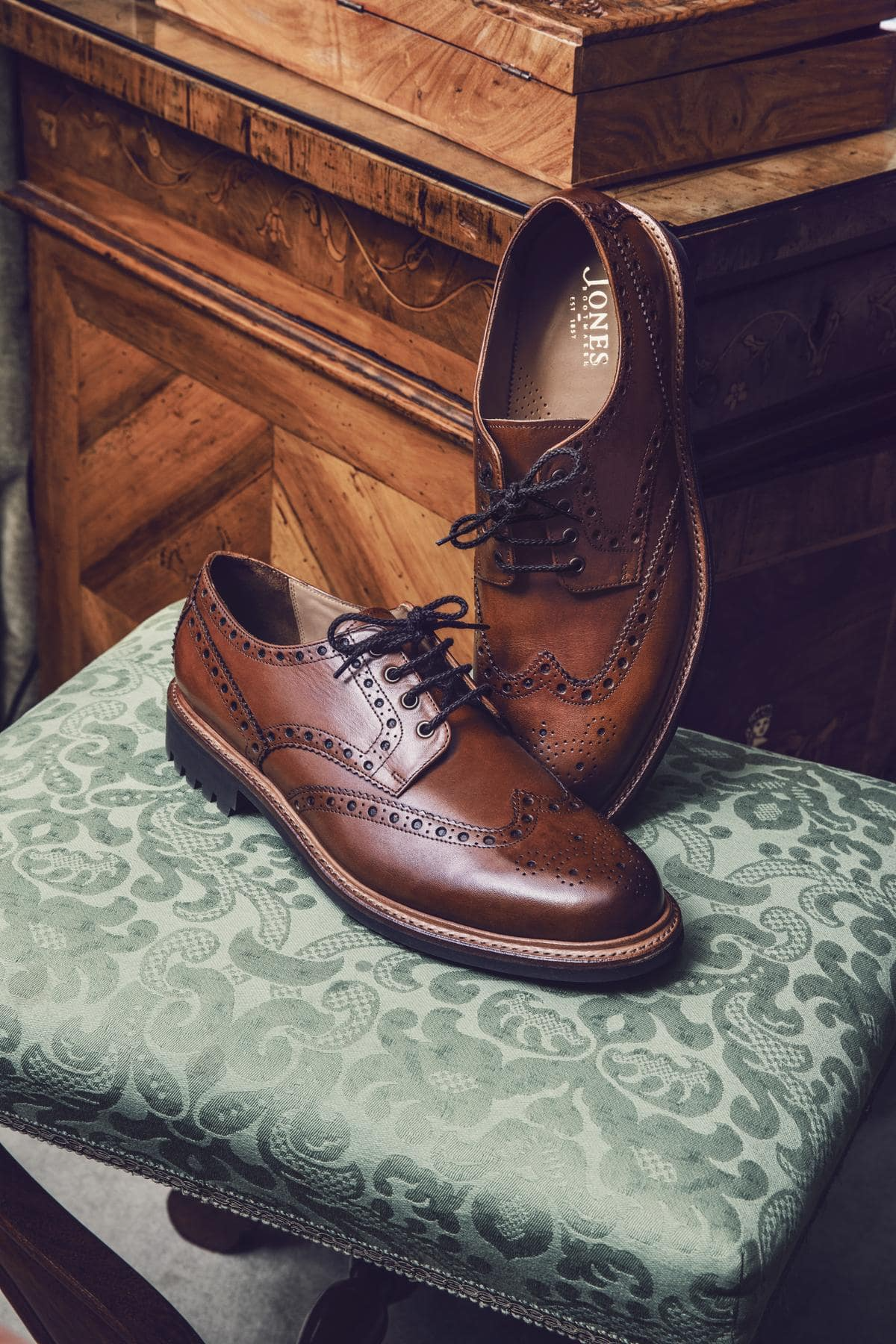 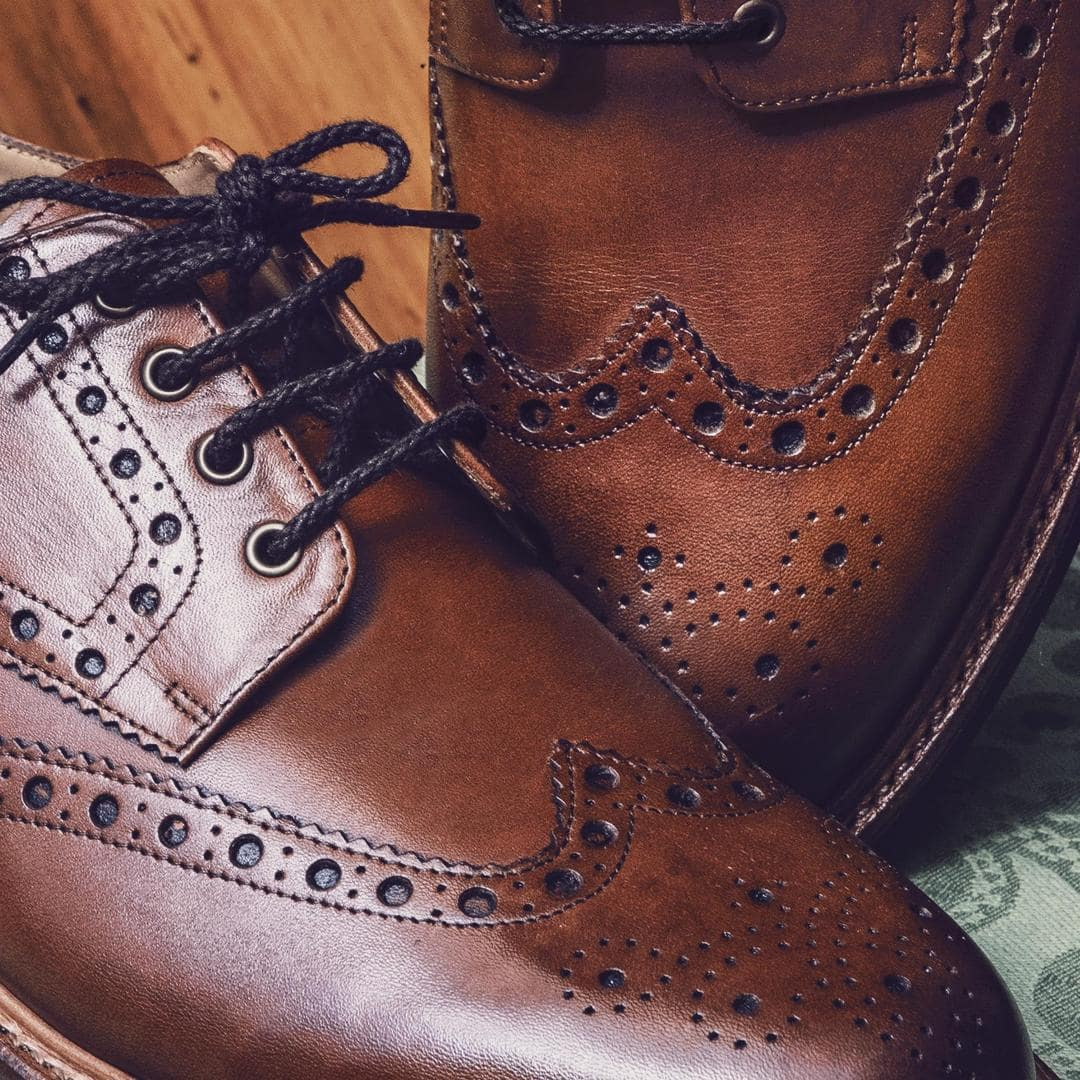 Instead, broguing refers specifically to the punctured detail and pinked trims that give ‘brogues’ their sophisticated charm. The puncturing itself has little to do with the construction of the shoe, which could be an Oxford or a Derby, or even a monk shoe or brogue boot.

Get to Know: 3 Key Styles 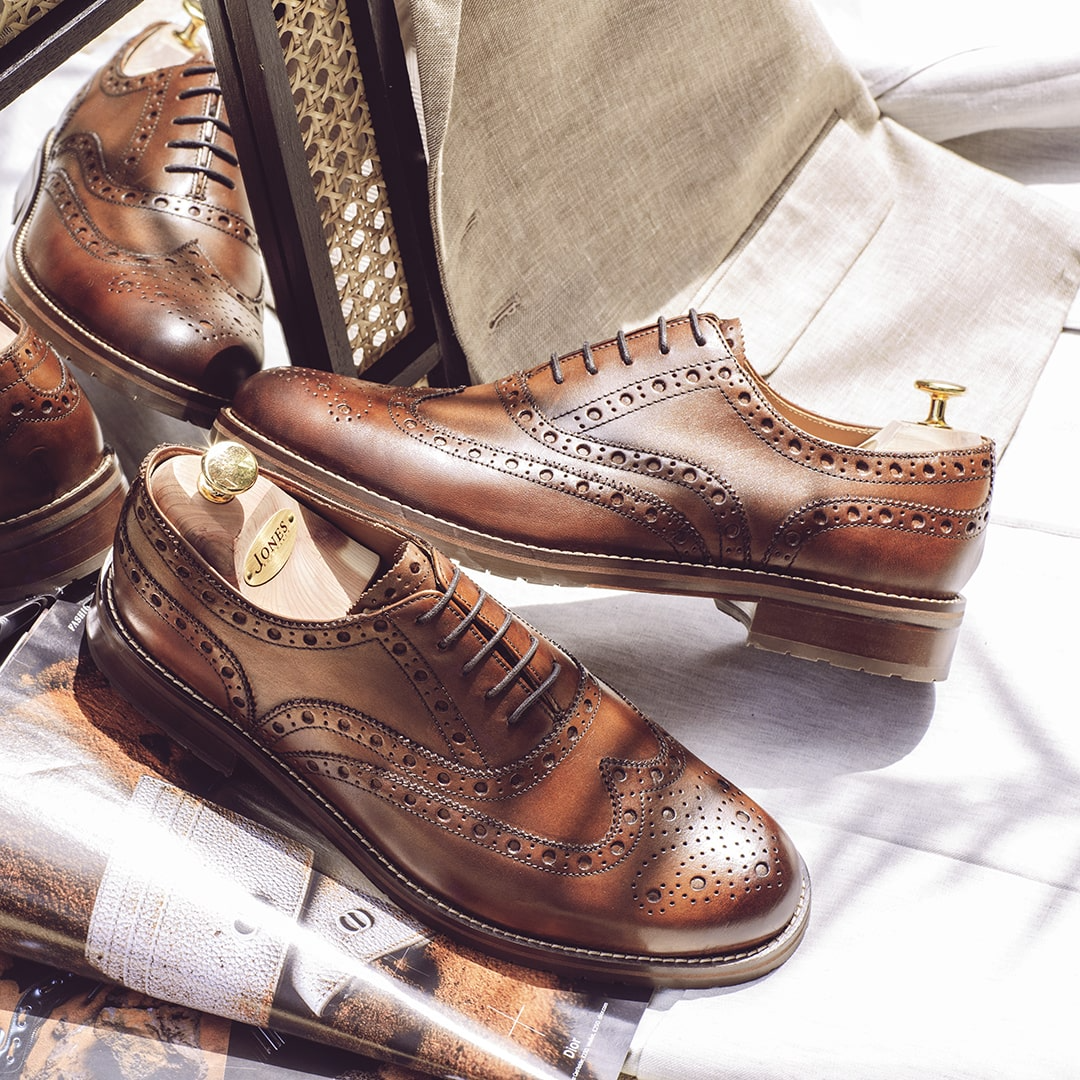 Also known as a wingtip, the full brogue is determined by its wing-like ‘w’ shaped overlay that starts at the toe and extends across the quarters, accented by brogue puncturing and pinked trims.

Team black leather brogues with the sharpest of tailoring, a winning look for a day at Ascot. 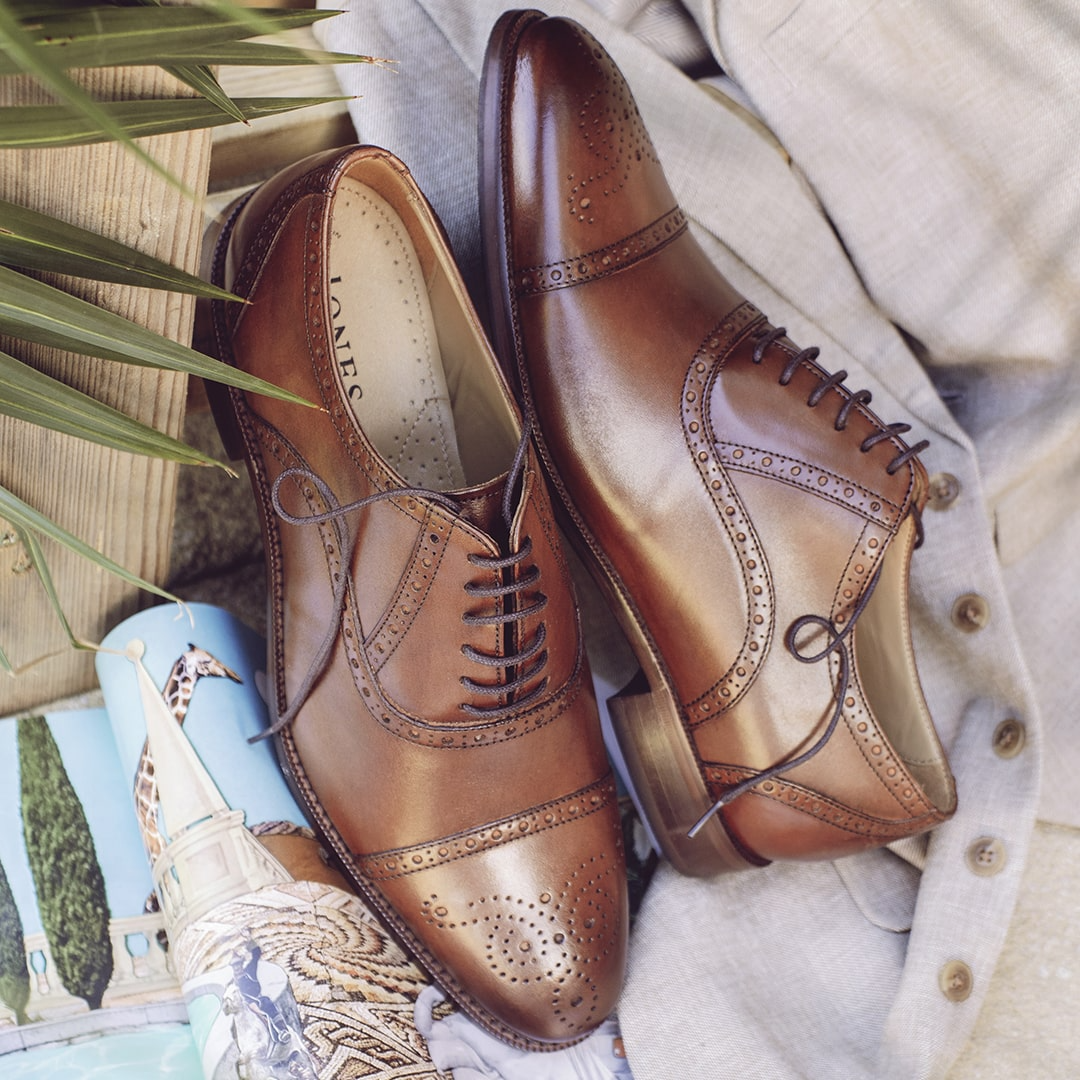 Known as the half- or semi-brogue, it is characterized by familiar punching and pinked trims, but the half-brogue is gently accented with subtle punching at the toe cap and across the quarters. 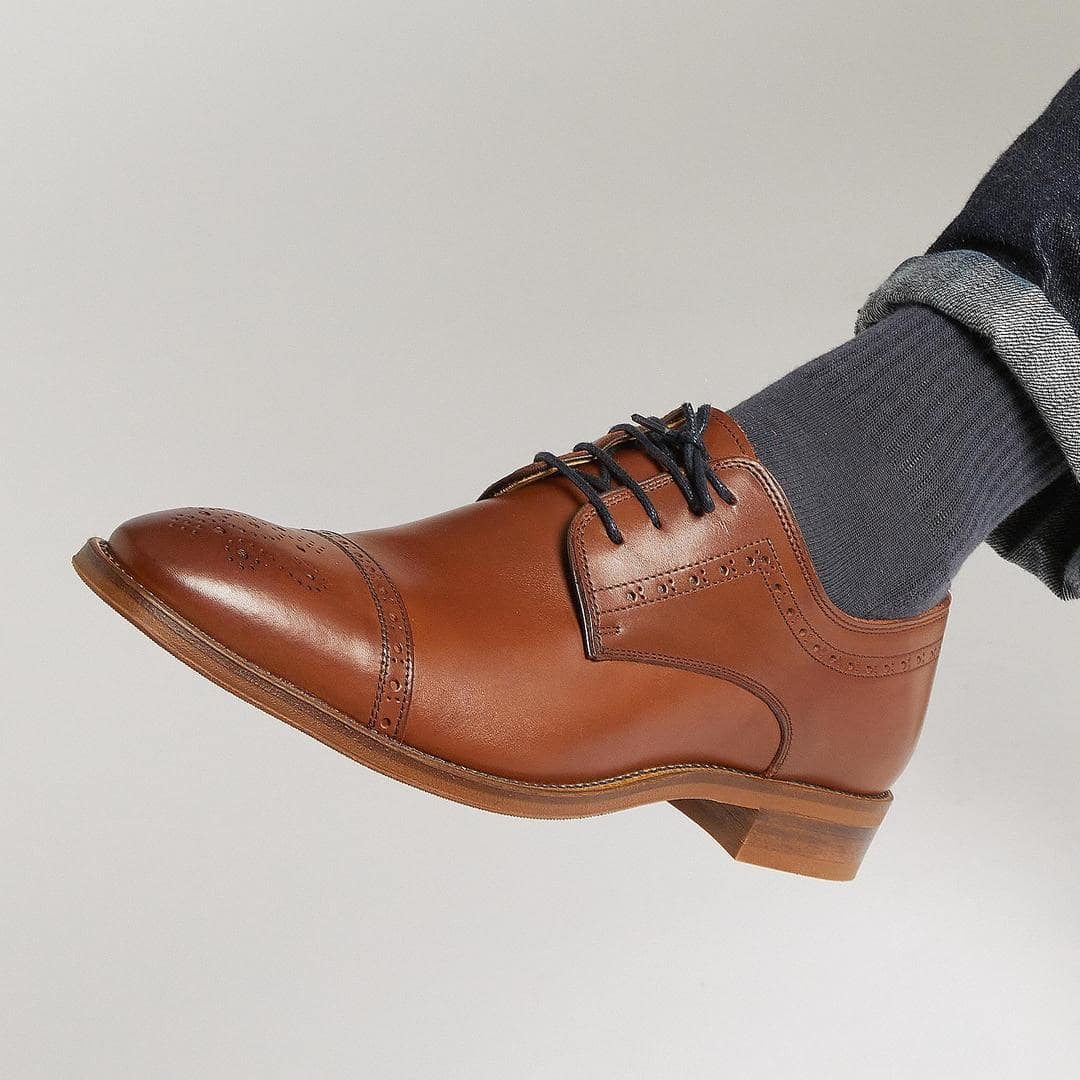 The most subtly decorated, the quarter brogue simply features perforations and trims along the toe cap’s edge.

Considered less formal than full brogues the quarter brogue holds its own in smart casual dressing, wear with colorful socks for a contemporary touch.

How to Style Brogues 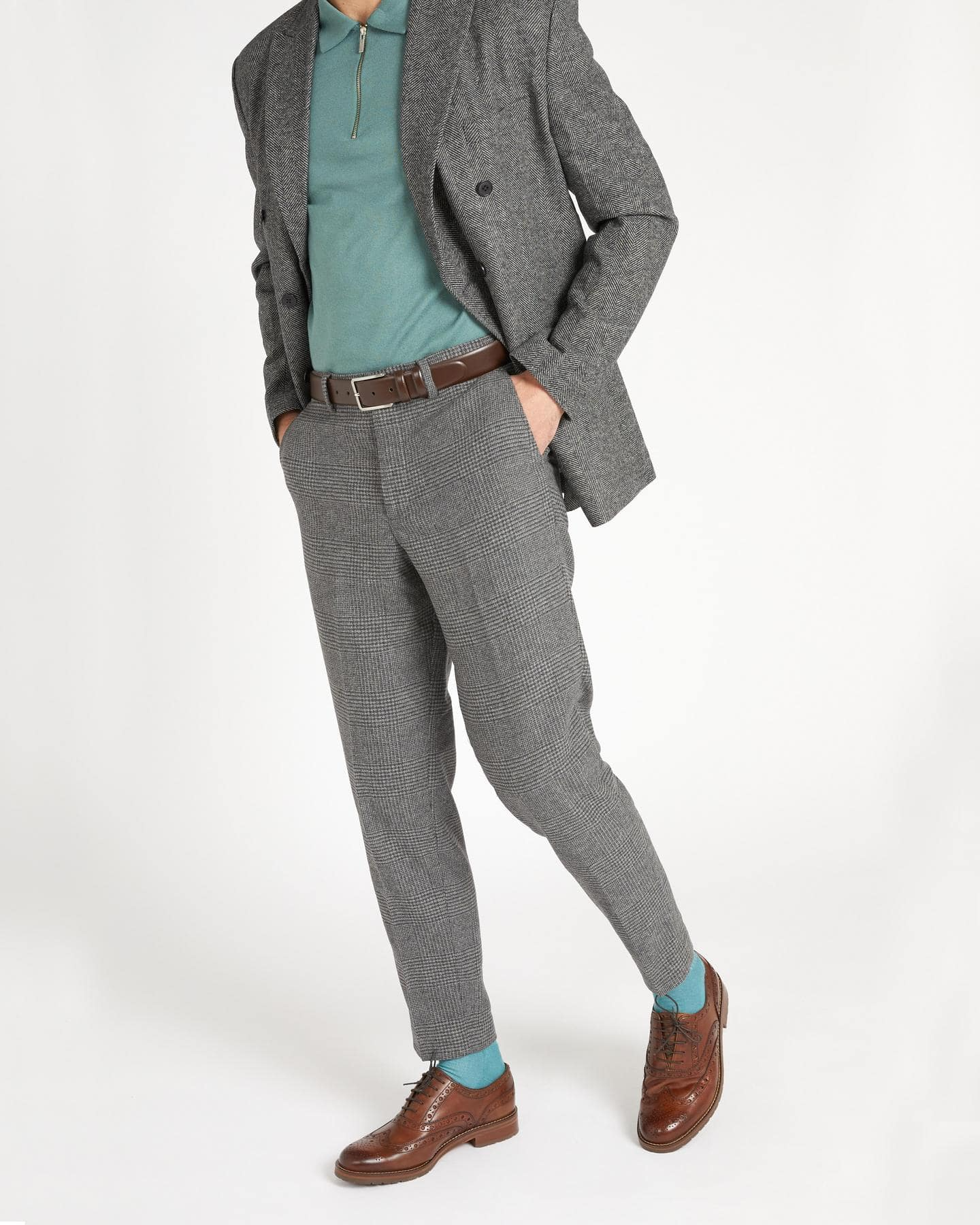 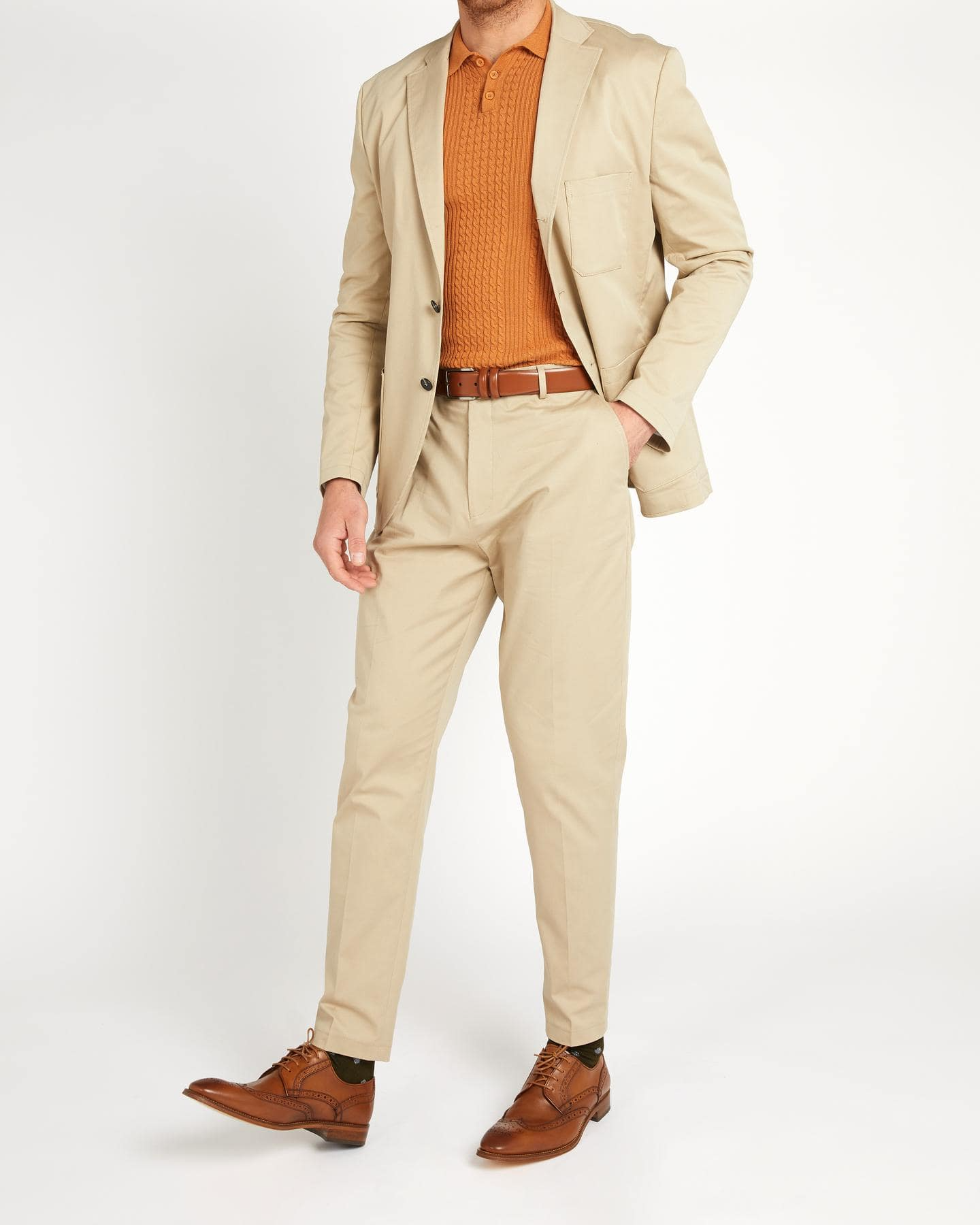 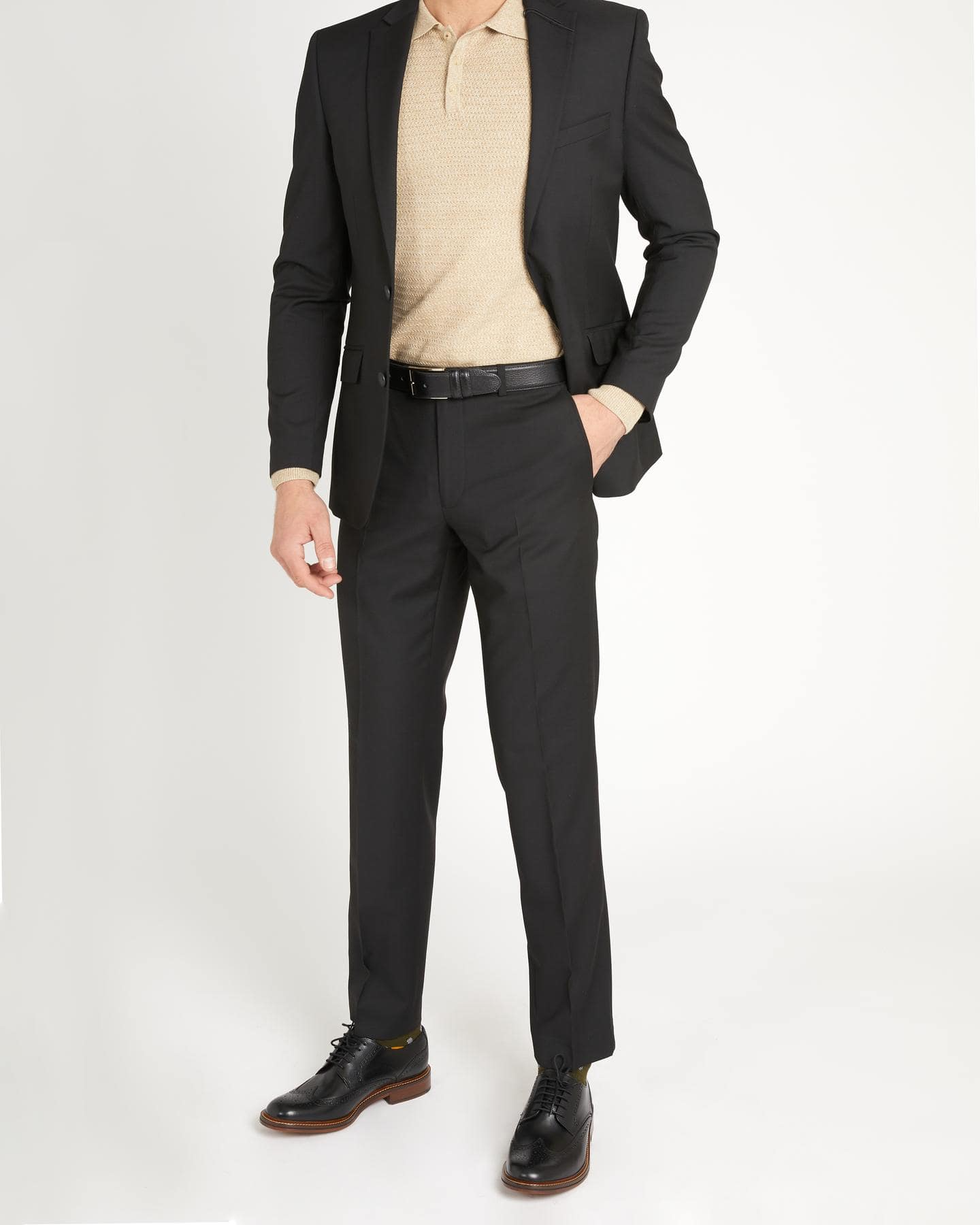 Well-crafted brogues are the natural companion to a tailored suit, completing the look with well-considered, detailed charm. As always, opt for leather construction, inside and out, in whichever silhouette, Oxford or Derby, you prefer.

A quirky statement sock will never go amiss when styled with brogues and a suit. Don’t forget to add a matching belt to nail this classic combination.

As for which color shoe to match the color of your suit? We’ve got a masterclass on that too. 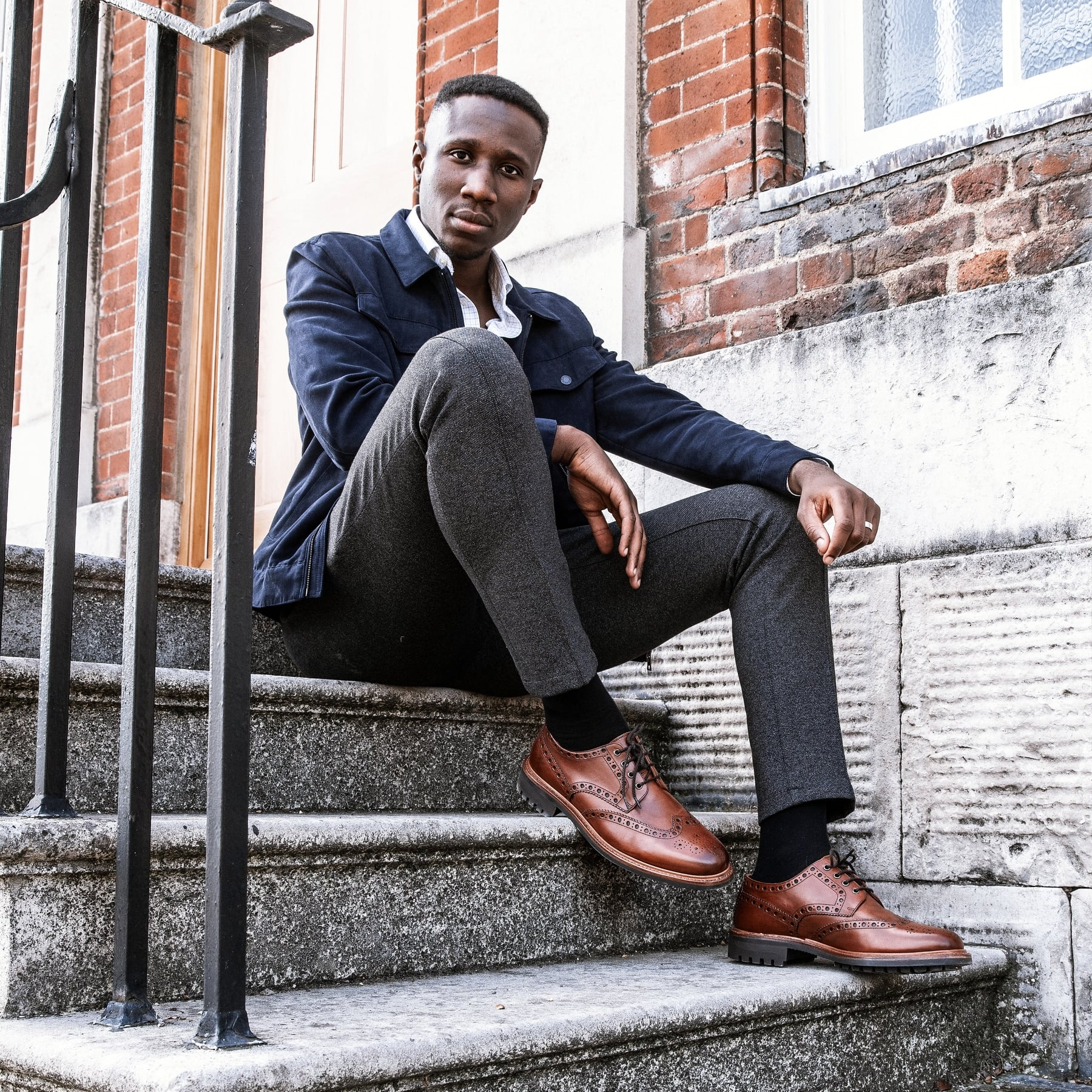 There’s nothing to stop you from donning your brogues for more laidback affairs. Make your brogues a focal point by opting for a pair in rich tobacco or tan leathers, paired with muted hues elsewhere.

A dark bomber jacket will bring out the timelessness of this statement footwear choice. 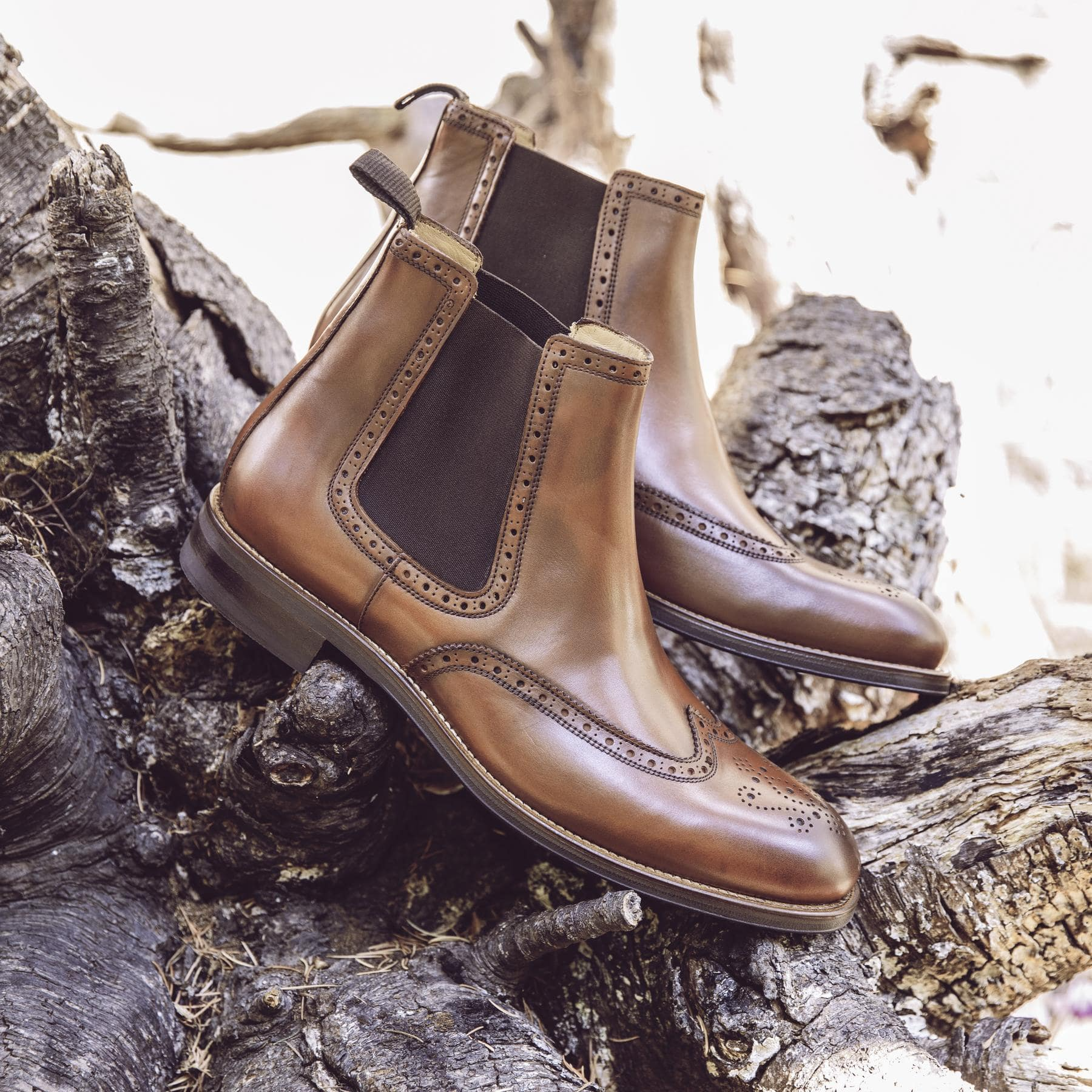 For a functional update in the autumn-winter months, brogue boots crafted in high-quality leathers will see you through your daily agenda, into evening get-togethers, and on to busy weekend plans.